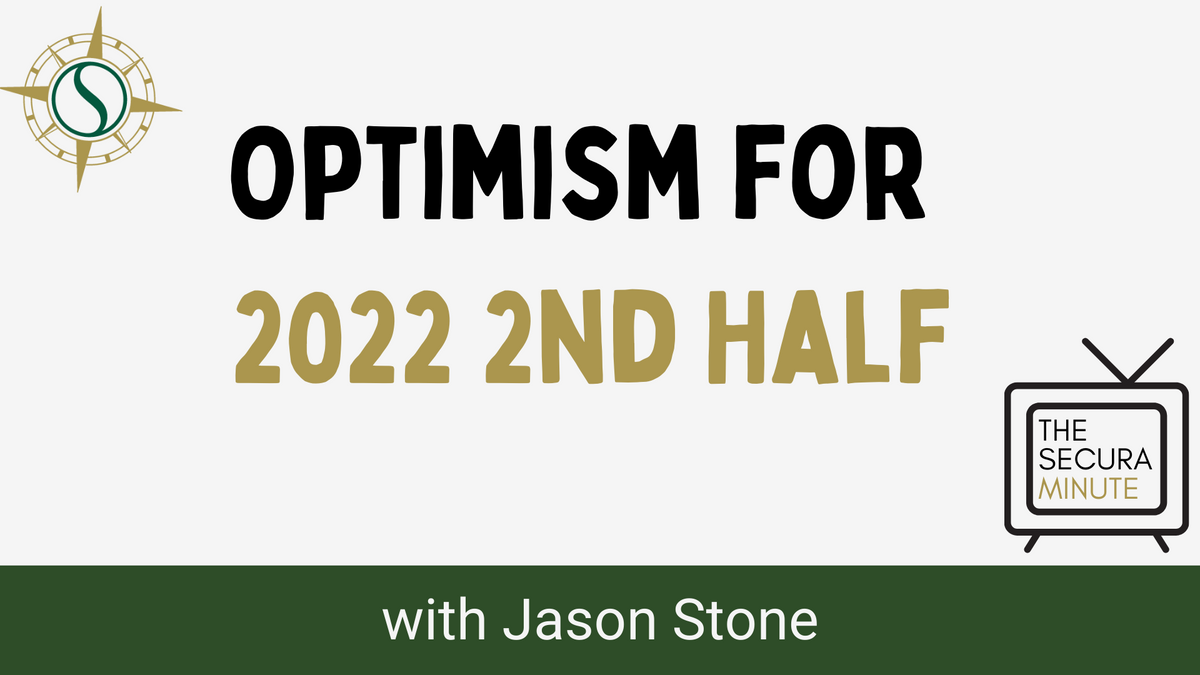 Hello, everybody, it's Jason Stone with the Secura Minute, and today I wanted to celebrate the 100th Trading day of 2022.

It's been an incredible year to say the least with the stock market really taking it on the chin. One of the worst starts to the year in history. Fortunately today, the market did close up as we're recording this on May 25th. So we avoided the worst selloff, start to a year for the first 100 trading days in the S&P since 1970. We were still right on the precipice of the worst trading day since ever for the Nasdaq 100 Index. But I'm here to share with you a little bit of why I think the second half of the year has some better things in store.

So a lot of the research we've been doing over the last couple of weeks has really been focused around is the market ready or is the market going to get a rebound? Do we have a bottom in sight or where does that go? And I think the important thing to note is that since May 12th, now going on two weeks, the market is actually positive, a little over 1.25% on the S&P with the market update today. We seem to have at least found the temporary floor, if not the outright bottom of the market, which we may have said a couple days ago.

But there's really a lot of optimism for why what has happened in the stock market for the first half of the year doesn't really match what we expect going forward. And the biggest reason is the shift in Fed interest rate targets from the end of 2021 through the first half of 2022 has changed dramatically. The biggest reason originally was that the Fed was forecasting one to two rate hikes, no recession at all on the horizon. Certainly, no Russia-Ukraine conflict, that's caused its own chaos in oil markets and other areas, but the shift to a projection of six/seven rate hikes in 2022. A huge shift in increase in interest rates has put a ton of pressure on equity markets, specifically growth stocks. Now we're starting to see some of this really moderate. The 10-year Treasury bond's gone from a high of about 3.15%, now settling around 2.7, 2.75 as we're recording this.

So we've seen interest rates certainly moderate down and over the last month, we haven't seen a real decline yet, but a leveling off of the inflation numbers. We expect with higher interest rates, and certainly, the Fed's hope is that we start to see those numbers moderate. A big part of that potentially comes from the housing market. If we start to see price increases and the housing market moderate, if we see oil prices continue to kind of level out in the $100 a barrel range, then we should start to see inflation numbers come down a little bit, temper that forecast and it should be a good positive sign for stocks for the second half.

One other thing that I really wanted to point out; There's a note from BTN Research that I pulled from a couple weeks ago, that the last seven times we've had a negative one-year return in the S&P 500, which we crossed that mark about a week and a half ago and went right past it over the last two weeks, has been that every time the market has gone negative on the one-year return, the following 12 months has an average up return of about 27%. That's a really good, positive sign for things moving forward, and it's pretty rare that we have a full year where we have a negative 15 to 20% drop in markets.

The market does tend to level out and rebound when we go through these dark down periods. So I'm very optimistic that over the next second half of the year, we're going to see a market recovery, and if you want more details or feedback or you just want to chat with somebody, please feel free to reach out to me or the team at Secura and we are happy to help you and give you some guidance on where we think you can go and how to reposition portfolios for the second half of 2022. Thanks for your time and look forward to chatting with you again soon. Thanks.